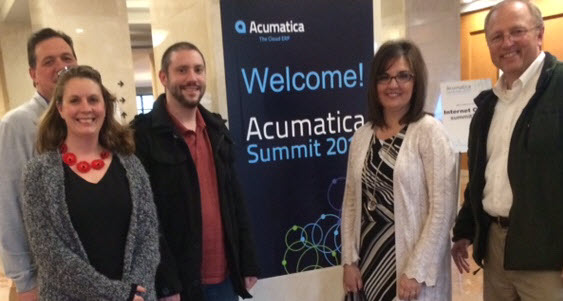 When the CAL Business Solutions team attended the Acumatica Summit 2017 event in January we had officially been an Acumatica partner for exactly 30 days. This event was a perfect way for us to connect with this new community. Between the 5 CAL team members who attended, we managed to cover every track offered and really immerse ourselves in the experience. Plus we attended 3 days of “post event” training for Pre-Sales, Distribution, Finance and Advanced Technical.

Here are some key takeaways from our first Acumatica Summit event:

I think all of us on the CAL Business Solutions team were impressed by the energy and excitement at this event. I heard many people say it felt like “the old days” when Great Plains was an “up and coming” new software product. We had the feeling that as a company Acumatica really cares about the success of their customers and Partners. At this point it is still small enough to be personal. Jon Roskill, the CEO of Acumatica was talking to people in the general session audience by name. Acumatica is still a relatively new product but it is growing and improving quickly so we see great potential.

Overall, I feel the event really delivered on the theme “Collaborate.Innovate.Accelerate” and we are excited for our future with the Acumatica channel.

I am happy to say that we have officially been an Acumatica Partner for less than 60 days and we just closed our first Acumatica deal.  We are on a roll so perhaps next year we will be on the main stage at Acumatica Summit 2018 as the “” award winner. It is good to set goals.

If you are interested in learning more about Acumatica, contact CAL Business Solutions 860-485-0910 x102 or [email protected]